For a lot of people, going camping or backpacking is the perfect opportunity to disconnect from the modern world and really “live off the land” for a few days. If you’re one of those people, you may not really see the need for camping electricity at all. Just load up a few propane tanks and battery-powered lamps and you’re good to go, right? Anyway, isn’t there usually electricity available at least at the main office of the campground? If you really need a boost, you can always go over there and do what you need to do instead of bothering with portable electricity for camping.

If that’s your style, then this article is not for you. But if you would like to still enjoy some of the conveniences of the modern world while you are out in the woods, there’s a good chance you might want an electricity source for at least some of the time that you are camping. Many campsites will offer full hookups with water and electricity, so that might even be good enough for you. But if you are in a more remote area, there are still some ways you can get a strong power source of portable electricity for camping, at least for a little while.

Many modern devices like digital cameras or laptop computers all have batteries that will need to be recharged periodically. You might also discover that you’ll need a few lights if you would like to stay up past dark each night, and especially if you decide to read or play games with your fellow campers.

Let’s take a brief look at some of your options when it comes to portable electricity for camping. You’ll find that a lot of these options are easily available on Amazon. We’ll list a few of them, and then go into greater detail further on in this article.

Your many adventures outside can last a whole longer with a good reliable power source. One of the best ways to get power is by using a generator, and here are a few of the most popular ones available today. 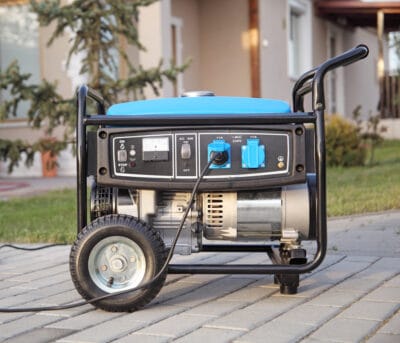 A gasoline generator requires little maintenance and is typically more affordable than a diesel generator.

One of the best pieces of camping gear to generate electricity off the grid is a gas-powered generator. While this is an easy way to provide power, it’s also very noisy. Many gas generators emit fumes while running, and this can ruin some of the fresh air you’ll find in the outdoors. We recommend using other ways to get your camping electricity unless you’re going to be camping in the wilderness with no other campers around. Gasoline generators can also prove to be prohibitively expensive.

Thermoelectric generators (TEG) like camping stoves are less efficient and more expensive than gasoline-powered generators, but they are superior in every other way. Using a TEG is a good way to convert temperature differences into electricity. These generators use some of the energy created from the temperature difference between two points, so you can use a TEG even in a wilderness situation by building a fire and using the burnt coals for the heat source. Just be aware that thermoelectric generators can even cost slightly more than gasoline generators.

A pedal generator is another type of electricity source, and this one is people-powered. A simple one will use regular bike pedals and it’s small and lightweight enough to carry with you on a camping trip. Not only will it charge electronic devices and small appliances, but it will give you enough power to recharge batteries for a flashlight or even a 12-volt car battery. 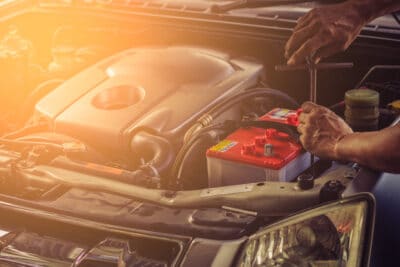 While car batteries are lightweight and portable, they require regular topping-up with pure water to replace water lost due to evaporation.

One way to get camping electricity is to plug into your car’s cigarette lighter outlet and use the car battery. This will work for charging cell phones and other small appliances, but you can’t use it for long or it will lower the battery charge too much for the car to start. You may want to try the BESTEK 300W Power Inverter DC 12V to 110V AC Car Inverter with 4.2A Dual USB Car Adapter to plug into the 12-volt outlet. This will give you regular power outlets and USB ports.

If you prefer to use a 12-volt battery like the one your car has for your electricity needs, it’s easiest to buy a portable 12-volt power source. These come with their own converters and outlets, and they often have panels that indicate how much charge is left. Some 12-volt power packs can also be used to jump-start your car’s battery. These cost about the same as pedal generators.

This is a modern solution for having a power supply at your campsite. Rather than lug a heavy battery backup or use your car for power, you can fit one of these portable battery packs in a laptop bag. If you need camping electricity just to charge a few small electronics, look no further than these packs.

The lithium-ion batteries in a portable charger can keep phones, cameras, and tablets running for days. Both the basic models and the more powerful compact portable batteries should include USB ports and standard 120-volt electrical outlets for charging. The power output is measured in amp-hours (Ah), and 27 Ah will be enough to keep minor electronics charged for a few days.

Portable packs like the Goal Zero Sherpa 100 Power Bank weighing less than 2lbs are compact yet provide enough juice to charge your phones and tablets for days. There are even 100 Ah capacity solar-powered generators that are larger versions of the portable battery pack. If you are car camping, maybe you can consider the chunky solar-powered generators. But for now, a smaller portable power pack should do. 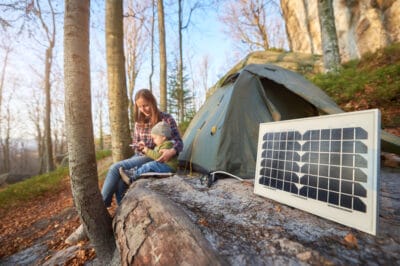 Solar panels are a very common and efficient portable power source for camping.

Solar power is a win-win solution for the question of how to get electricity while camping. It’s clean, quiet energy and, once you’ve purchased a solar setup, it’s free. Portable solar panels can be set up in the sunniest area of your camp to take the best advantage of the available sunlight. Of course, you have to rely on sunny days for electricity, and that’s why you need battery storage as part of your solar electricity camping kit.

Most solar power camping setups include a portable battery pack. For outdoors, you’ll want a kit that’s rugged, waterproof, and lightweight. When there’s no sun, your battery pack should have an attachment allowing it to be recharged from your vehicle as well. You might need an inverter so that the power pack can be safely charged without damaging your vehicle’s battery.

Some of the benefits of solar kits include easy setup and little effort to keep going. They also need very little maintenance. If you are just going to charge your iPhone or tablet, a portable low-wattage solar charger such as Anker 21W Dual USB Solar Charger should be more than sufficient.

Solar kits generally don’t work at night or even the day in places where sunlight is blocked. If you are in a dense forest or it’s a cloudy day, then you might run into problems. Wind or water turbines generate electricity directly from wind or water. These devices often have a maximum power output of 15W and they offer two 5V USB ports for charging. As with solar power, this is free too! If you are not near any water source, you can simply hang the device on a tree and let it collect wind instead.

RVs have a 12-volt battery separate from the car battery. These are usually 30 or 50 Ah systems that power the basic functions of the camper such as lights, vent fans, and the water pump. This battery is strong enough to power small devices but not the larger appliances that you might find. It can be recharged with an electrical hookup at a campground or even by the sun if you have solar panels. The battery is automatically charged whenever the motorhome is plugged into a power source or when it’s running.

For several days of stationary camping, though, this won’t really give you enough electricity. If your RV has solar panels, the basic functions will work for a few days. But if you want to use air conditioning and other energy-draining appliances, you will soon need more power. One solution is to include a battery bank in your RV that can be charged at a campsite or with solar panels. This is a connected set of 12-volt batteries that are evenly spaced in your camper to keep the weight distributed properly.

Most modern motor homes also have a built-in gas generator that runs using the fuel in the gas tank. Some of them switch over automatically when electricity demand is high, and others have to be manually set to the generator mode, which can be valuable, even in campgrounds where electricity is provided. If too many campers are draining the electrical grid, there may not be enough voltage to operate some of your appliances. Operating them with insufficient power can permanently damage them.

Tips to Make the Most of Your Power Source

Look at All of Your Options

Overall, there really are a lot of ways to generate electricity for your camping trips. Price, available space, and ease of use are some of the most important factors to consider when deciding which option to choose. Some options, such as solar panels and TEG generators, can cost a lot upfront but they yield solid value because of the amount of free energy they produce. Always remember that battery storage is a vital component of whichever setup you choose.

Last but not least, always think about safety in your campground. Whatever power source you end up using, you will need to be especially cautious while camping or using it around sleeping bags or in a tent with a stove jack. Having plenty of electrical power can be perfectly safe, just as long as you follow some of the most basic precautions. It can certainly be risky to use electricity inside a damp tent unless the tent is properly shielded and connected. If you’re hooking up to campsite-supplied electricity, you will need a special, heavy-duty waterproof connector line that includes damp-proof sockets for plugging in all of your equipment.