A dolphin tattoo idea is often linked to a sense of fun, free-spiritedness, and playfulness, yet also attracts the tattoo enthusiast with a love for wider ocean themes, conservation, and protection.

Dolphin symbolism is most popular with female collectors, taking on different meanings, styles, and technical representations. Dolphin tattoos range from tiny, simple black ink linework to full-scale underwater and ocean scenes, or the quintessential image of a dolphin leaping from the ocean

While men also get dolphin designs, they are statistically more likely to embrace a shark tattoo idea or other sea-going creatures to show off their love and respect for ocean life.

The following article breaks down the major symbolic meaning linked with dolphin tattoo art. Whether man or woman, the information below will help you develop a suitable idea to take to your tattoo artist to create an amazing body art piece. 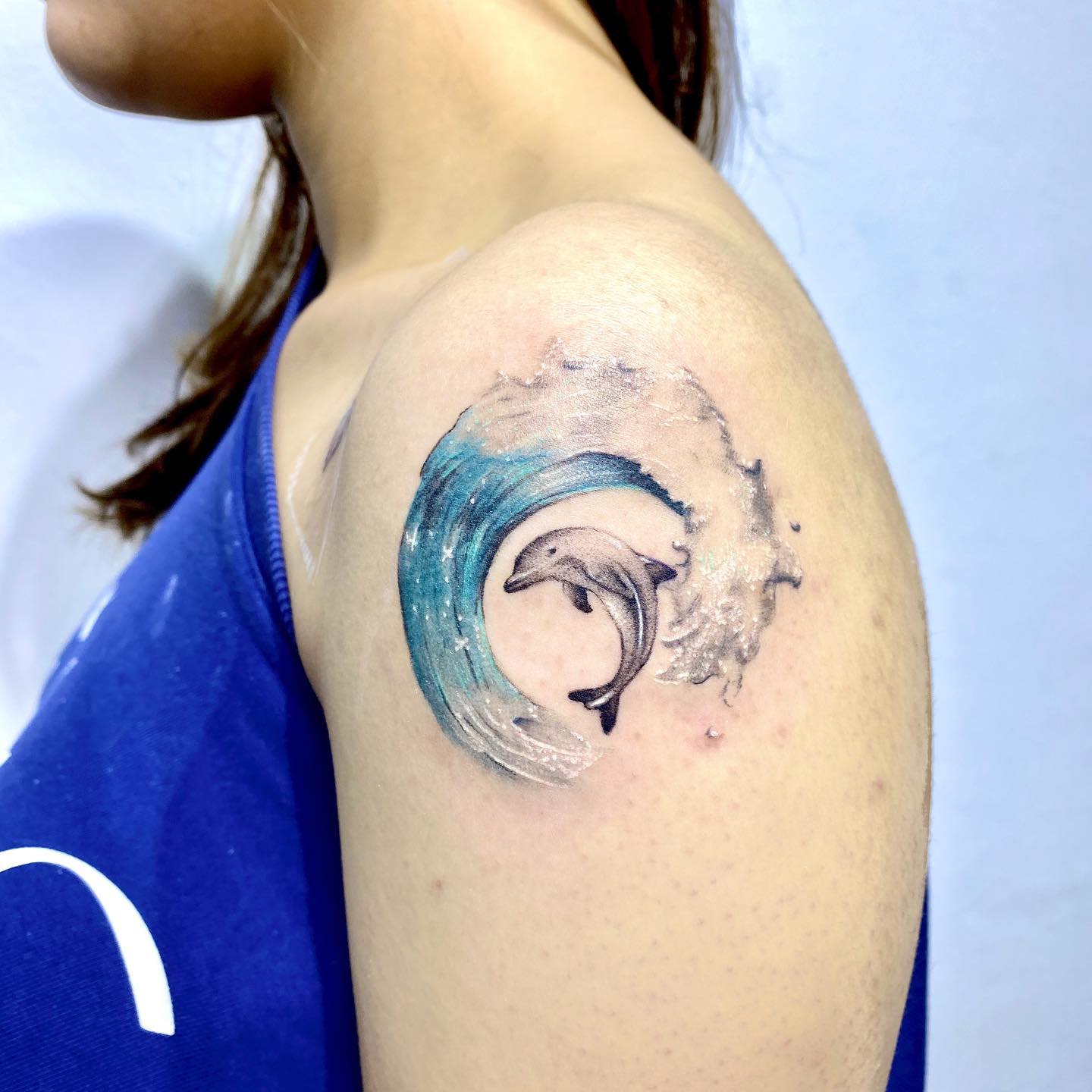 A dolphin tattoo idea is a popular choice for lovers of aquatic life and is also associated with playfulness and fun.

The tattoo dolphin is a great choice for those wanting a cheerful symbol of the beach and ocean, while also appealing to people who identify as free spirits.

The dolphin symbol is most often etched for female tattoo lovers, who often choose smaller versions of the animal, often leaping from the water or frolicking in the surf. 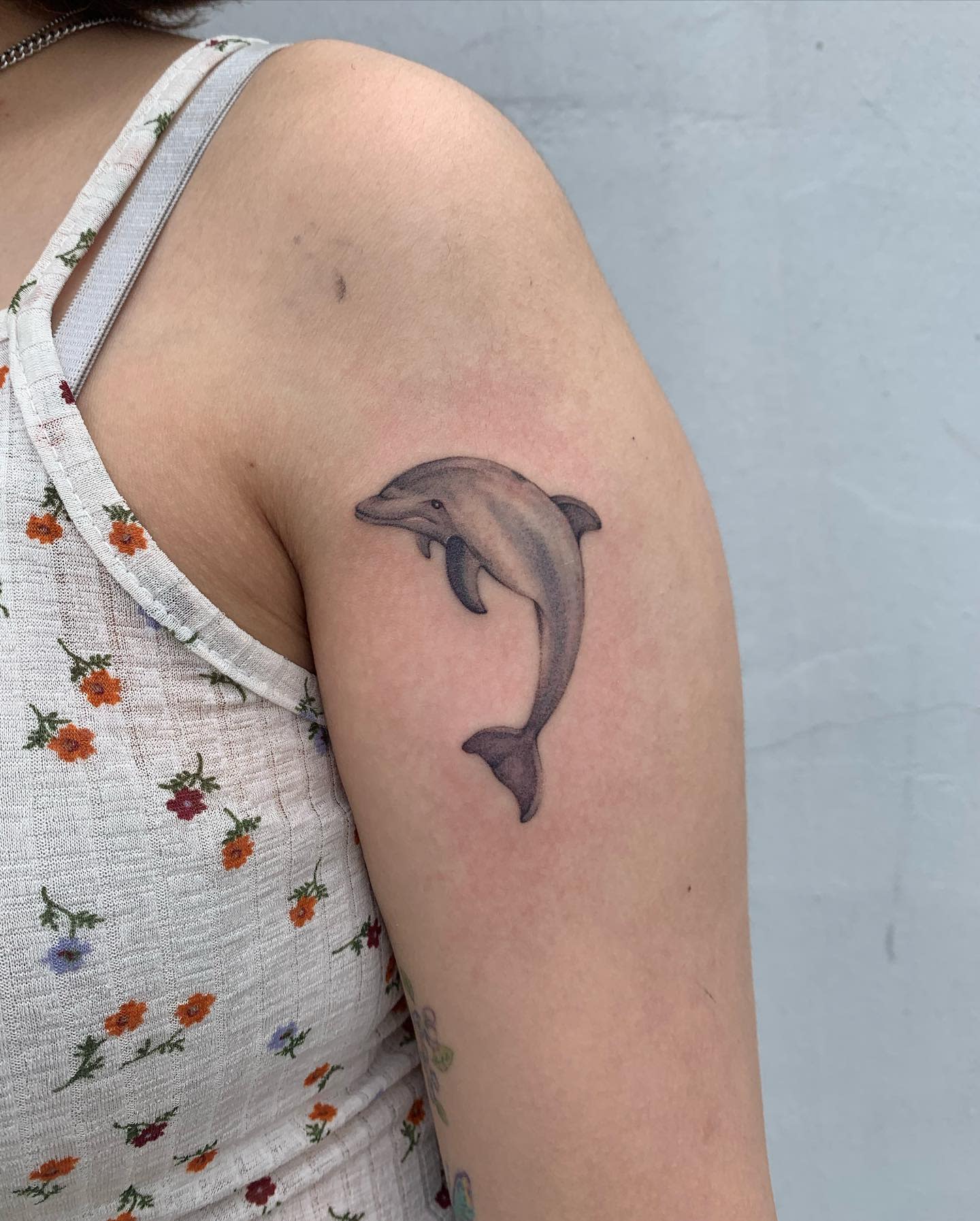 Dolphin, moon and sun, and butterfly tattoo ideas have been continuously popular body art subjects for female collectors, aligning the concepts of freedom, fun, and the sea with tattoo art. While men also get dolphin symbol designs, they are statistically more likely to embrace a shark tattoo idea, sailor, or anchor tattoo theme when associating their art with the sea and beach.

The increased range of beautiful tattoo concepts women are exploring has been a boon for tattoo artist portfolios everywhere, and the development of more complex and interesting dolphin totem tattoos is worth noting.

With more women opting for a stronger, bolder, sexy tattoo style of personal body art, tattoos accentuating the curve and flow of skin have been gaining popularity along with more complex creations with layers of symbolic meaning. 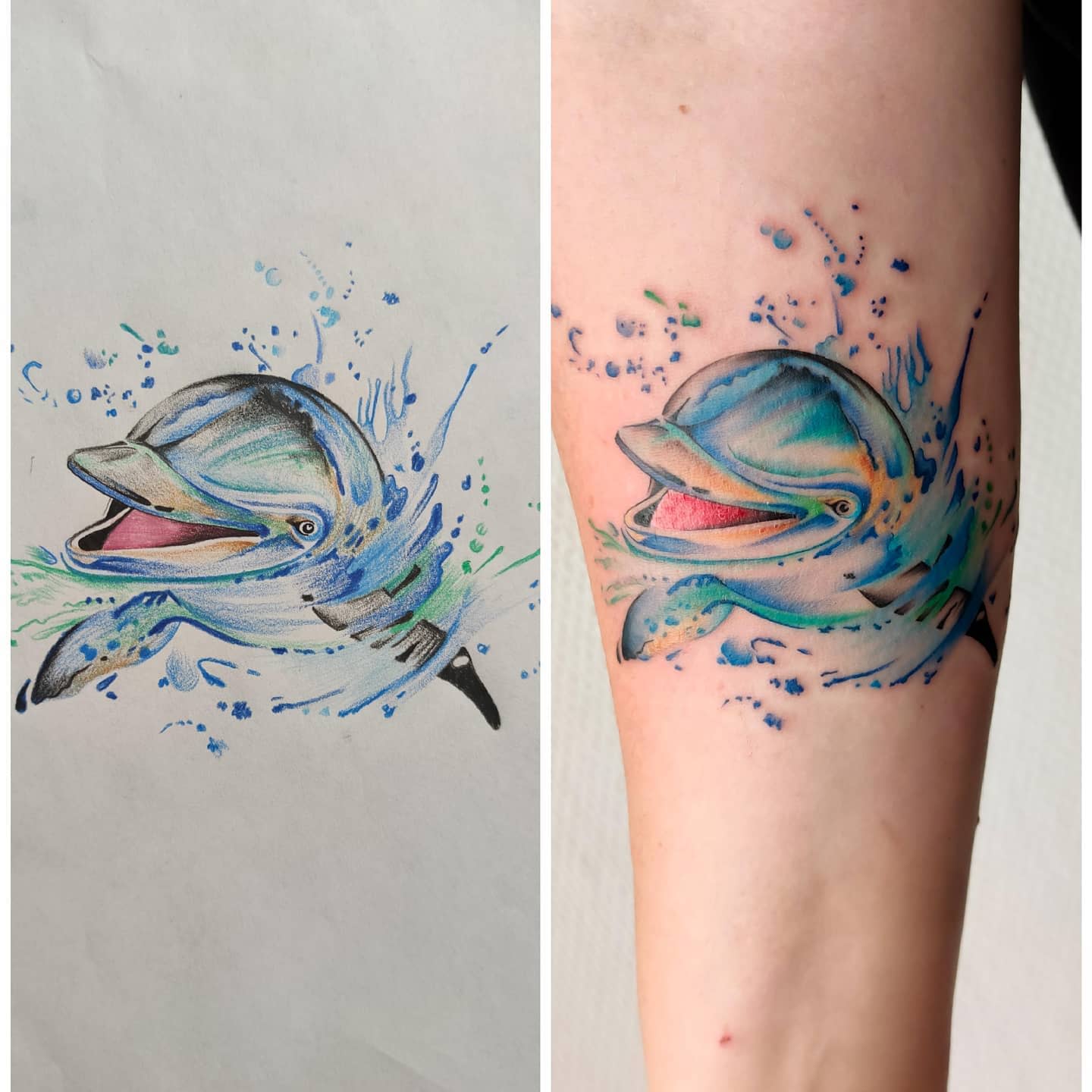 In contemporary tattoos, the ocean (and forests) have become symbols synonymous with environmental conservation and sustainability.

Those who enjoy large tattoo scapes may opt for placing a dolphin amongst other sea creature designs underwater, or on the crest of a wave. Others choose to get a single tattoo dolphin totem to depict their commitment to the water.

Conservation dolphin tattoos range from simple designs to intense and intricate concepts, yet the love of marine life is palpable for every piece. 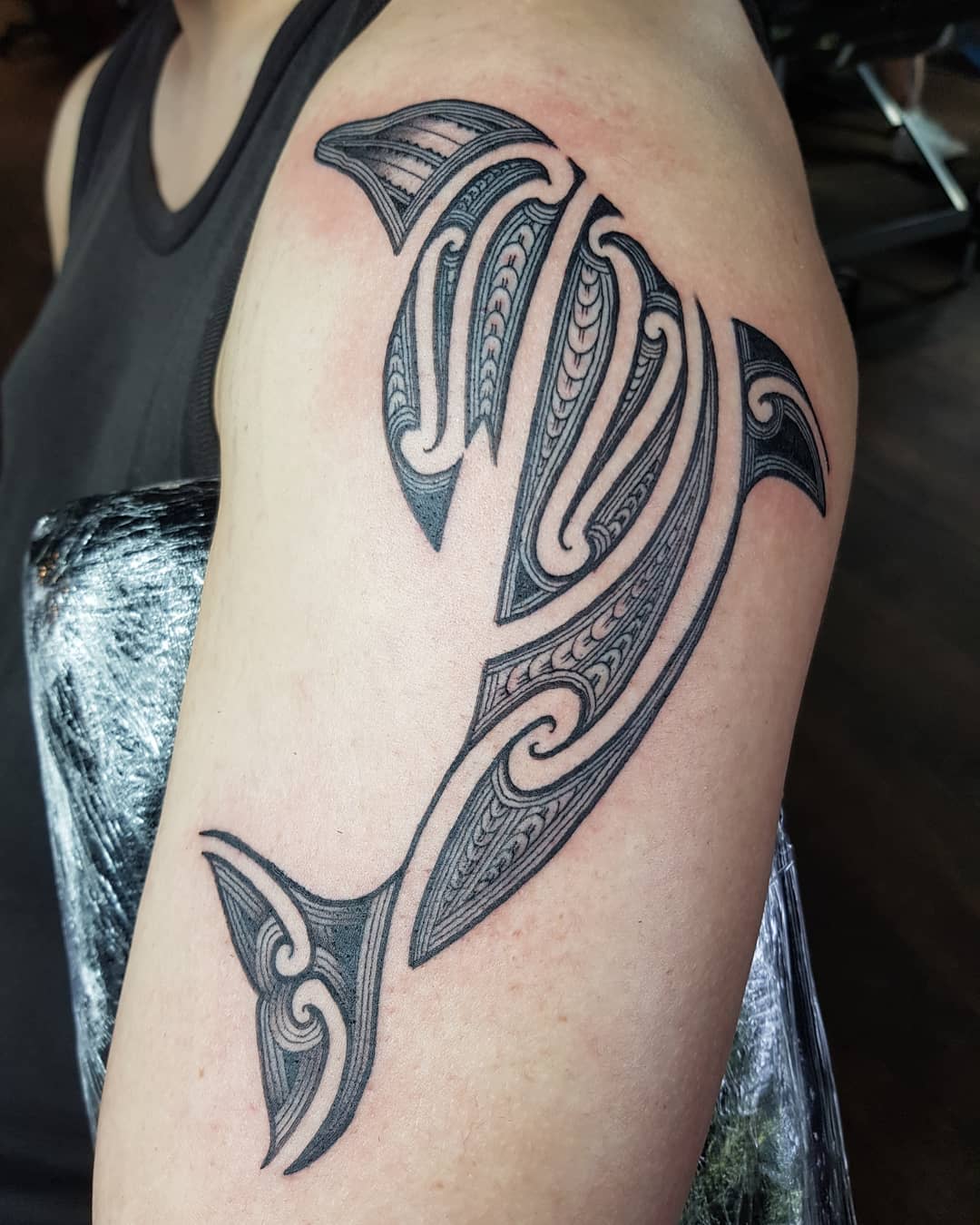 Traditional Polynesian tattoos and Celtic dolphin tattoos date back to ancient times. The dolphin is an essential element at all levels of Polynesian tattoo and tribal tattoo design, used as part of the intricate black ink patterns Islander peoples choose to tell their life stories.

Tribal dolphin tattoo designs, much like other animal patterns, are associated with inner strength, good luck, and spiritual guardians. Tribal tattoos may also refer to the fishing, hunting, and warrior lifestyle, along with life achievements, tribal status, and personal journeys of Celtic tattoos.

These tattoos have very specific meanings attributed to different patterns and designs, with the dolphin spirit being used as a simple stand-alone image, or one used in combination with other important symbols to make a deeply symbolic dolphin meaning design. 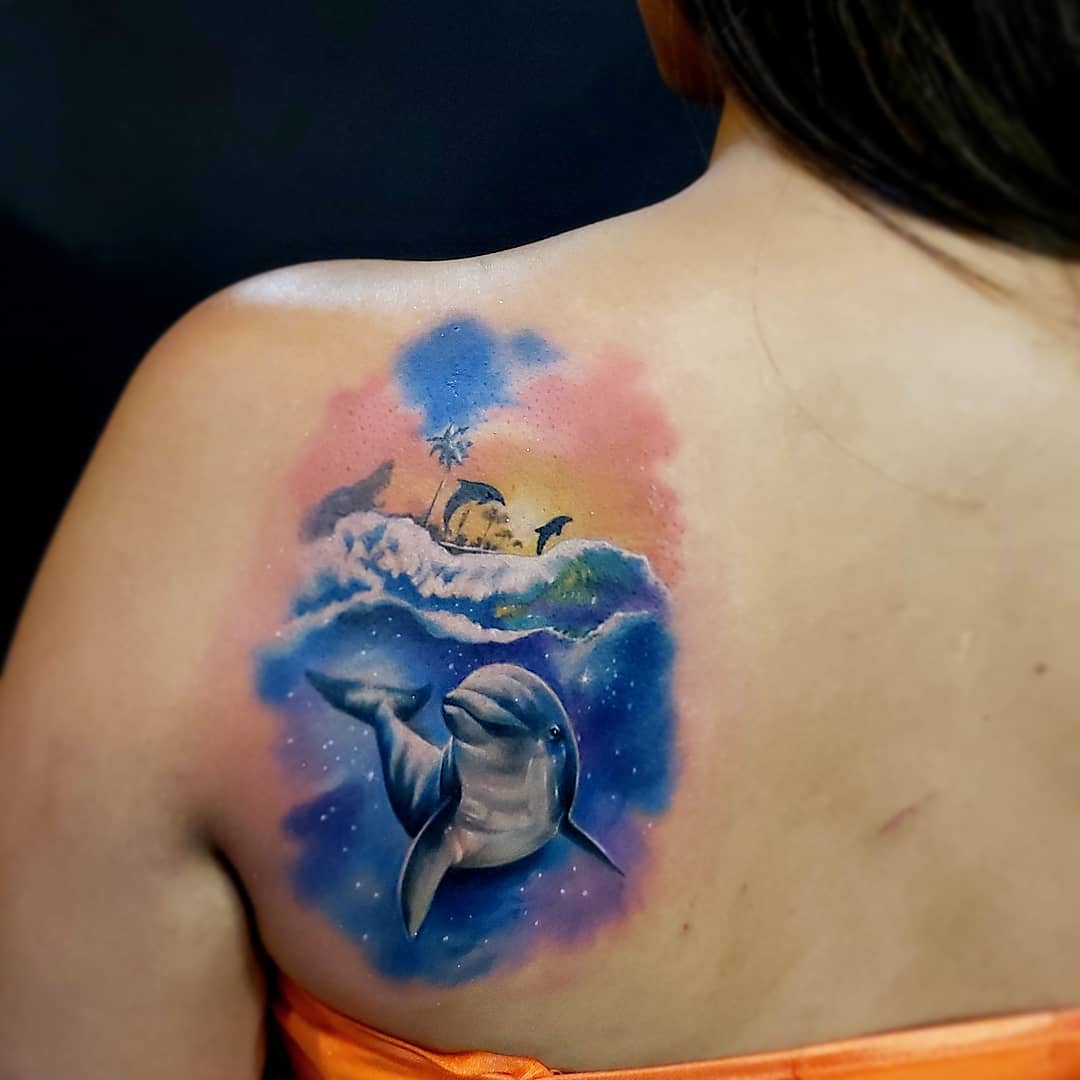 Sailors, swimmers, and surfers alike all understand that the tide is much greater than themselves, and respect the forces beyond their control.

Oftentimes dolphin symbolism is representative of the ocean, a love of the sea and surf, conservation, or a sense of belonging to coastal villages, towns, and cities.

For tattoo lovers who dwell near or on the water, dolphins tattoos are often worn as protective totems, a message of unity with the elements, and depicted from a small dolphin tattoo through to large, amazing dolphin spirit animal ideas incorporating underwater elements.

Other tattoos holding symbolic meaning with the ocean are simpler: many people live their lives at or near the water and are tied to the waves and flow of the tide or find magic in creatures living underwater. 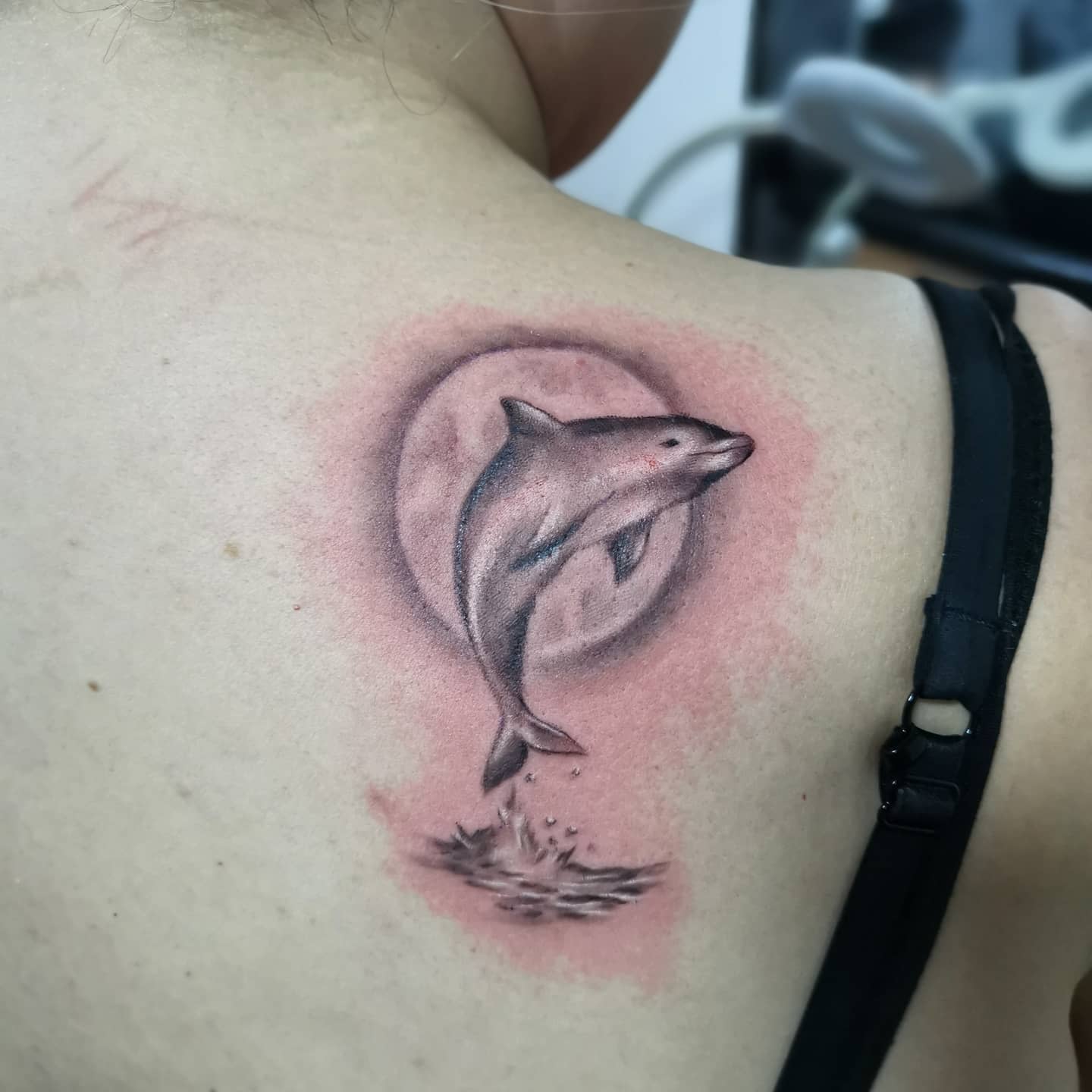 The bottlenose dolphin, being a sleek gray creature, makes grayscale art applied with a single needle or complex dotwork techniques a quality method of etching.

Other dolphin designs can be simple linework designs or filled in black ink, however, more complex images depicting a frolicking dolphin or more than one sea creature are also hugely popular. 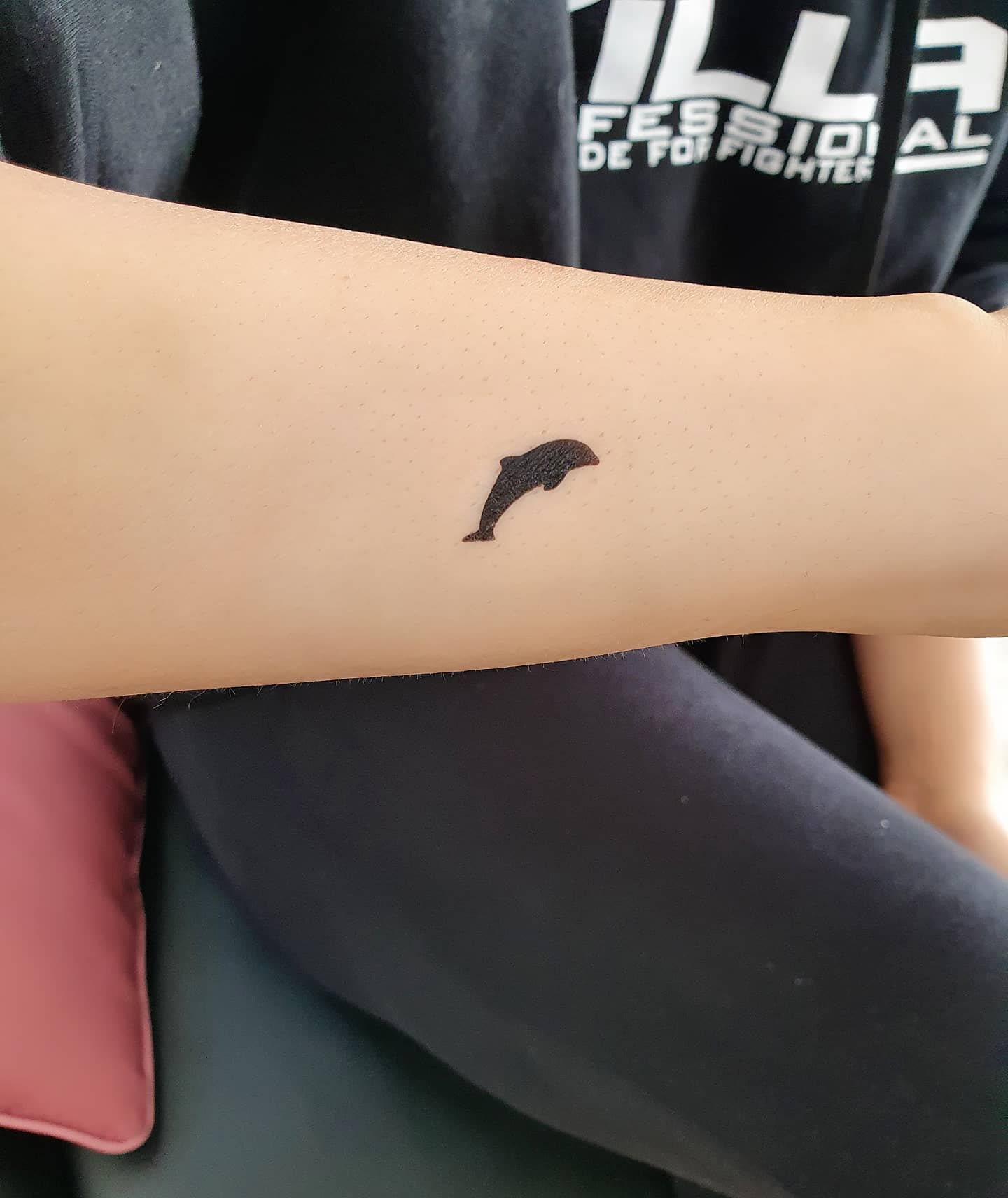 Sometimes the simplest designs carry the deepest meanings. The dolphin, even in small tattoo form, has held a powerful place in tattoo art as a symbol of playfulness, fun, and a link to wider ocean themes.

The simple or small dolphin tattoo is a gentle reminder that you can indeed choose an animal motif with deep meaning to you, but have it etched by a tattoo artist in a more private fashion

The simple tattoo is just that: a decisive small tattoo of one’s love for the dolphin and its behavioral characteristics, or symbolic love for marine life in a wider context. 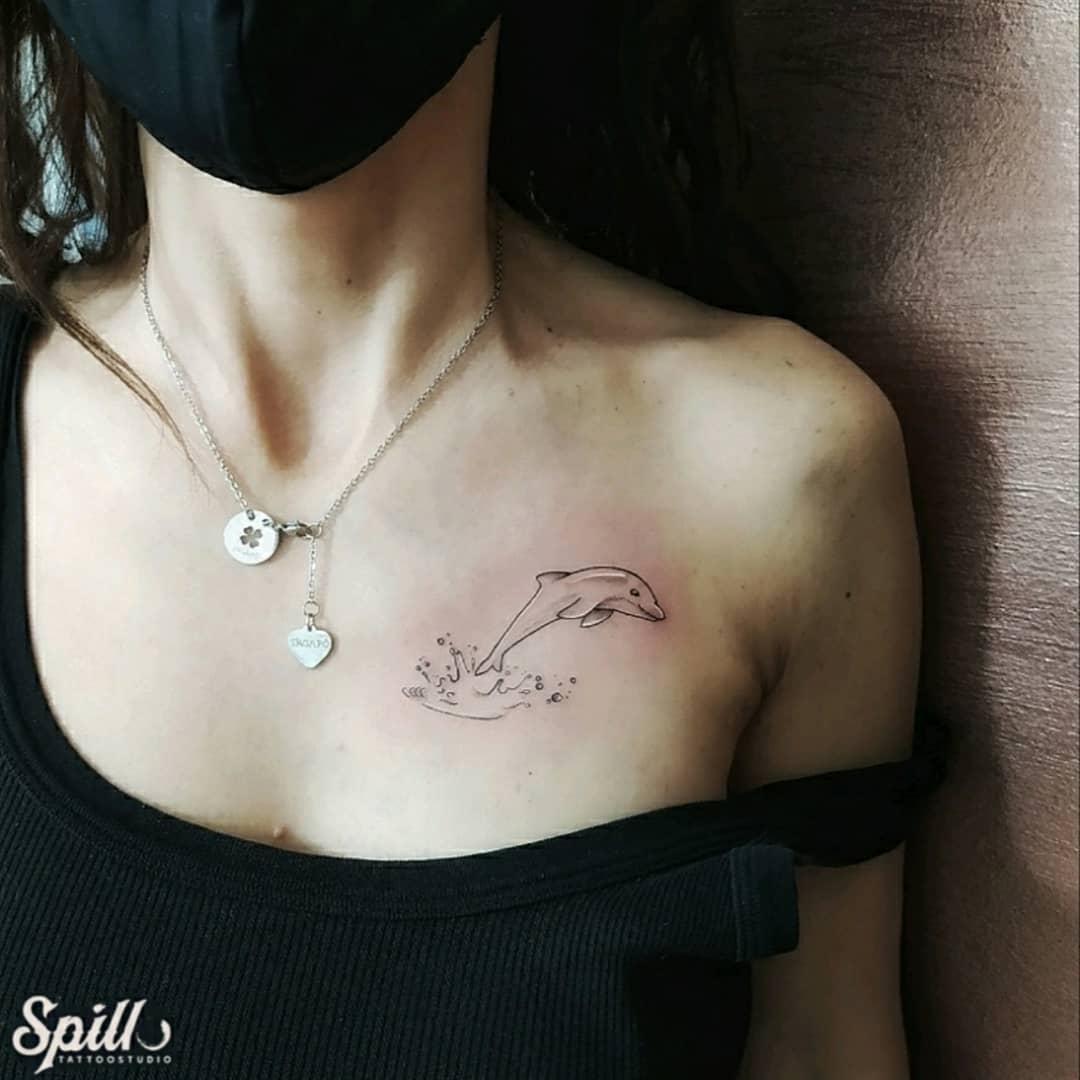 Arguably the most visible style of dolphin tattoos is when the creature breaches the surface of the water or leaps from a wave.

These tattoo designs are often a great replication of the moves a bottlenose dolphin makes in nature, and in show parks, aquariums, and conservation enclosures.

These styles of the dolphin symbolize the creature’s fun-loving, playful nature, and willingness to put on a show, a theme central to the subject’s desire to mirror the dolphin’s personality traits. 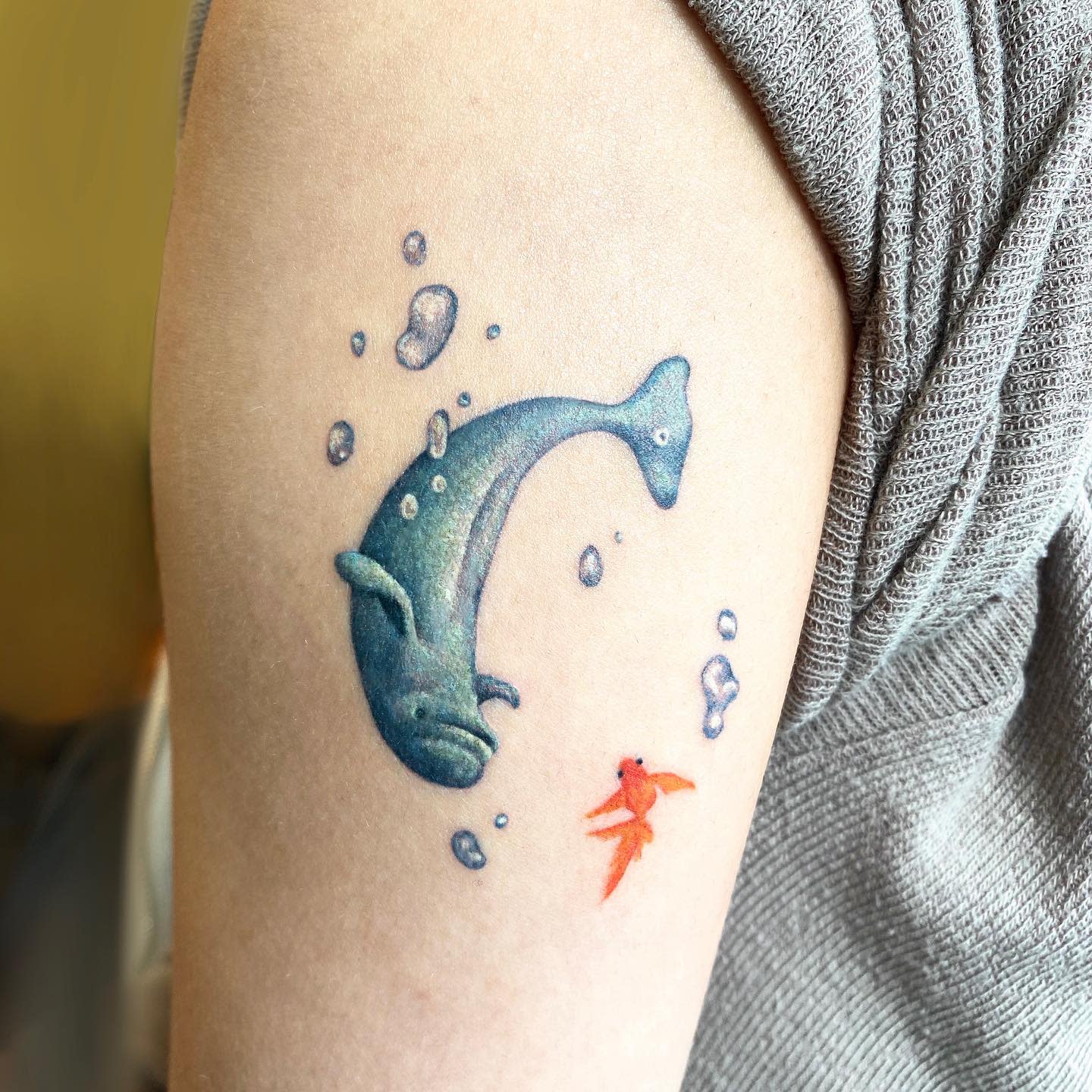 Colorful dolphin tattoos add to the fun-loving, free-wheeling concept of the dolphin’s behavior, and make a popular choice for visible body art.

A staple of women’s tattoo design, colorful dolphin art often emphasizes the many different shades of blue, either to add depth to the dolphin itself or emphasize the water environment in which it lives.

Others still like to take a central dolphin image and add a watercolor element by mixing loose yet vivid color schemes into the design.

The dolphin tattoo design is great for water lovers or those with a passion for aquatic life, and a great choice for those looking for tattoo art that demonstrates a fun and playful nature.

The style you choose for a dolphin tattoo piece can range anywhere from small and simple to culturally important or high-impact, large-scale color tattoos.