Among the many artists who are covered in tattoos, Lil Peep was late American singer with many interesting tattoos with some very sweet and meaningful and others totally random or just for fun. Lil Peep was the famous model, songwriter, singer, and rapper. His songs were a true revival of emo styled rock and hip-hop music. He passed away on November 2017.

Several reasons make Lil Peep an inspiration for tattoo ideas. While many celebrities get tattoo to look cool and make sure they have a tattoo design that looks apart from the rest, Lil Peep just loved getting as many tattoos as he could regardless of them being old or new.

Peep had been his nickname since his childhood. His mother gave him the name lil peep. He not only got famous from this name but also got a tattoo on his upper right arm.

Well, many people may find centipedes creepy, but they can make a cool tattoo design.  Lil Peep found centipedes scary and hated them.  But he found a way of overcoming his fear of centipedes and got one tattooed on his inner forearm.

The tattoos on his body tell us how much of a fun and emo personality Lil Peep had. Interestingly he was also born on Halloween night i.e. first of the November. He got his birth date 11-1 on his belly in the form of a tattoo.

Celebrating his Halloween birthday with his birth date tattoo wasn’t enough for Lil Peep. He had a few Halloween tattoos on his body, after all why shouldn’t he. He had stars, bats and other spooky stuff inked behind his ear. Lil Peep also had a spooky pumpkin with flames on his left forearm.

Now, this is another of Lil Peep’s tattoo dedicated to his loved one. Meep was Lil Peep’s dog which he and his girlfriend bought and took care of together. He used to call Meep his son and loved him so much that he got a tattoo of it on his leg.

Here is a very interesting tattoo Lil Peep got on his throat. The tattoo is intriguing not only because it involves our all-time favorite cartoon character ‘Lisa Sympson’ but also because it holds special meaning for Lil Peep. Lisa tattoo on Lil Peep’s throat screamed, ‘Mom!!’ This tattoo was a reminder of how he used to miss and call his mom whenever something wrong or stressful happened in his life.

Just below his Lisa Sympson’s tattoo, Lil Peep had a tattoo, which read Hellboy in a funky Algerian script font.  He got this tattoo in 2016 after his mixtape Hellboy was released. He was a great fan of Hell boy movies and comics.

Among all of the sweet, fun and interesting tattoos Lil Peep had, we found this Pink panther tattoo and the story behind it amusing. Lil Peep was chilling with his friend on the Venice beach when he got this Pink Panther tattoo in hot-pink, on the left side of the Lisa tattoo. He was thinking of doing something different and fun on the beach and ended up getting this tattoo out of boredom.

Like all other artists, Lil Peep had to travel a lot, but he badly missed his home and his mom. Therefore, he tattooed letters  ‘ Homesick’ on his knuckles.

For Lil Pepp tattoos were such a normal thing to have that he necessarily did not need to have a meaningful tattoo every time. The red anarchy on his check was just a random idea he had for a tattoo.

Lil Peep had this tiny broken heart tattoo under his left eye right above the red anarchy tattoo. He got this tattoo in 2015 when he was under depression and felt unloved.

Lil Peep was a simple and straightforward person, and so were most of his tattoos and their meanings. He had a tiny horseshoe tattoo on his forehead between his eyebrows. The tattoo was just to him to enjoy good fortune.

Lil Peep always wanted to have a tattoo form the famous tattoo artist Ed Hardy. Lil Peep met Ed Hardy in England and got a skull tattoo on the right side of his head. He thought a skull tattoo would give a nice interesting visual on his head.

Racing Flag Tattoo on the Head

How can a one head tattoo be enough for this tattoo lover? Lil Peep decided to get another head tattoo. He got this racing flag with red fumes tattoo on the left side of his skull. This was not a pleasant tattoo because of how much it hurt him.

Tattoos were an important part of Lil Peep’s personality. As he grew, the number of tattoos on his body grew too. One day he woke up with a tattoo that read Get Cake Die Young above his forehead. He had no idea how he got that tattoo and was unable to recall anything regarding it. Lil Peep happily accepted this tattoo. What’s even more interesting is that this meaningless tattoo actually turned out to be true for him as he did die young.

This one is very simple and looks nothing more than a kid’s drawing. The mood tattoo has the face of a mouse with a teardrop on its check. Below the mouse, the tattoo reads MOOD. Lil Peep himself said that this tattoo is a very low quality representing how low his mood can get. But this is one of his favorite tattoos.

This is another one of Lil Peep’s interesting and meaningful tattoos. He got this tattoo that reads Cry Baby on the right side of his forehead. He got this tattoo to remind himself not to act like a crybaby and be ungrateful, as there are many unfortunate people out there.

Tribal designs are classic and make an awesome tattoo. Lil Peep had this amazing tribal black tattoo on his right arm just above his Mood tattoo.

Lil Peep believed in God, so he had a sparkling cross tattoo on his right shoulder. 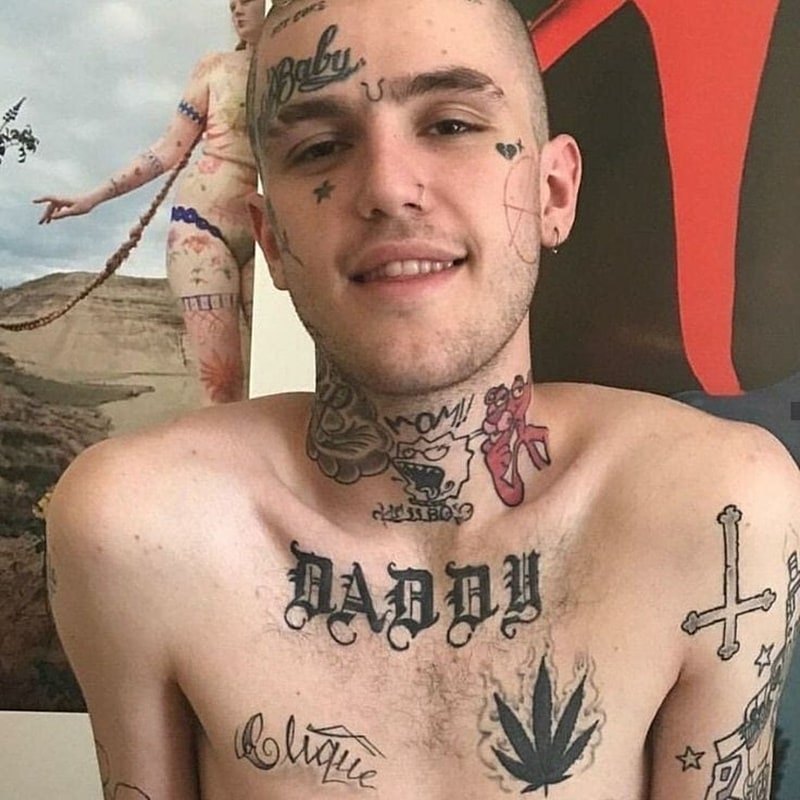 How many tattoos Lil Peep had on his body?

Lil Peep had total 55 tattoos on his body.

What was Lil Peep’s favorite style of tattoo?

When and what were the first tattoos Lil Peep had?

Lil Peep’s first tattoos were his mother’s birth date and initials. He had these tattoos when he was fourteen years old.

Among Lil Peep’s tattoos, which ones were his most favorite?

Mood Tattoo, Meep, and Cry baby tattoos were his favorites.

Is it safe to have a head tattoo like Lil Peep?

Here are 20+ best of Lil Peep tattoo ideas. With so many ideas get as many tattoo designs to express yourself and slay. Happy Tattooing.